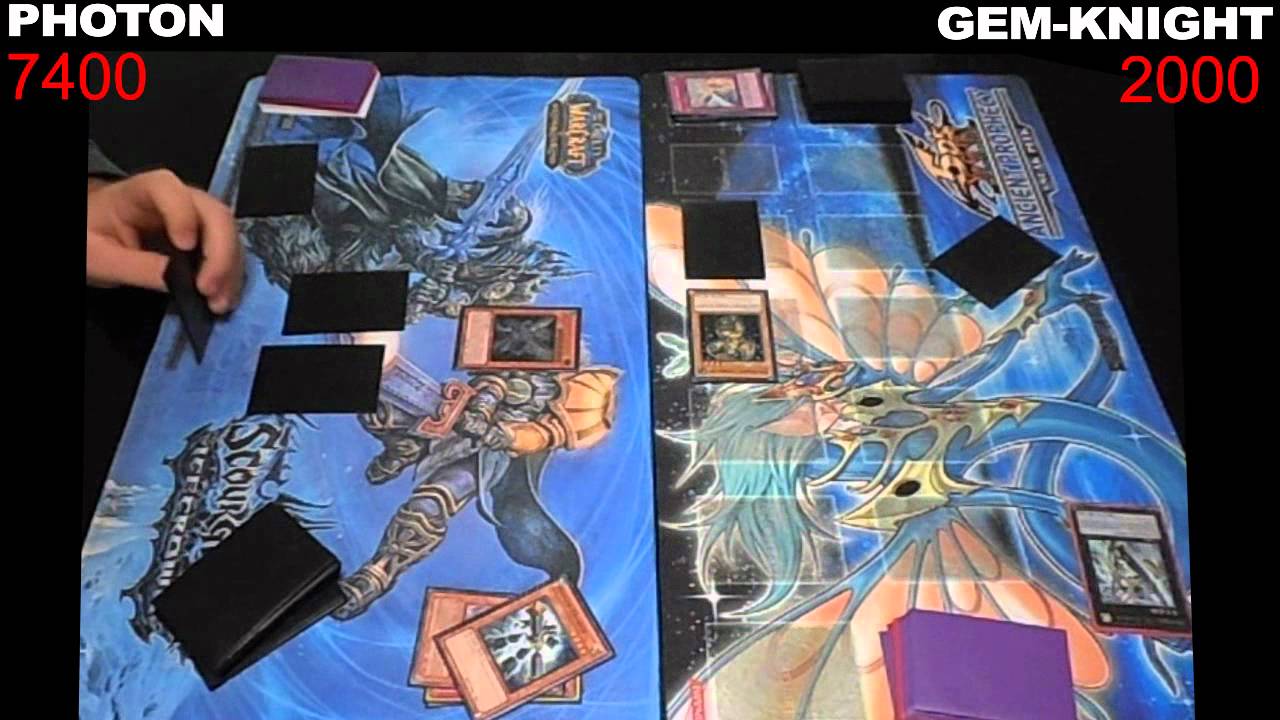 Yugioh Duel: Photon vs Gem-Knight – Round 1

The buzzing sound fills the air in an almost mechanical hum. At first it is an almost silent, distant sound, but soon it grows, and the buzz seems to engulf the surrounding space. It becomes so loud out that one must cover their ears to keep the noise from becoming overwhelming. Off in the distance, beyond the edge of the great cliffs, a small black cloud appears, and just like the buzzing sound that preceded the dark cloud, it too, soon becomes larger, and before long, the entire sky becomes a shadowy blanket that covers the land. An evil is coming to consume all that is good in our world.

The people cry to the heavens to send them a light to shine through the darkness. And with that, a pulsating light is seen in the far distant sky, and in a fraction of a second; the light races through the sky to land before the people, and there stood mighty beast, one who would become known as, Galaxy Eyes Photon Dragon.

The power of this creature was unmatched by any the darkness could throw at it and the people rejoiced as the great dragon was able to fight off the evil. As time went on, the Galaxy Eyes Photon Dragon stood watch over its people. This heavenly creature made sure no unwelcomed soul could set foot on their land.

It was a time of peace and trade, soon the people wish to trade with a nearby kingdom, stories of the outlandish gems that could be found their sparked the imagination of many. So a message was sent to this kingdom that they wished to trade, and message returned to expect an envoy of merchants.

Soon, wagon after wagon arrived from the nearby kingdom, there where so many; they seemed to outnumber the original inhabitance of the land. But as the last wagon entered; it was revealed that it was not merchants that drove the carts, it was warriors; with armor that sparkled of gems.

With so many of these Gem-Knights running about the land creating havoc, the great Galaxy Eyes Photon Dragon could not be everywhere at once, so the great beast descended upon the greatest warriors of his land and blessed them with his power, they aroused with the power of Photon energy at their side.

But was the gift of the Galaxy Eyes Photon Dragon given too late? Was there still any hope for their land.,,,

How to set up Galaxy VR for Android with BoboVR controller

The Hunger Games: Mockingjay Part 2 Official Trailer – “We March Together”