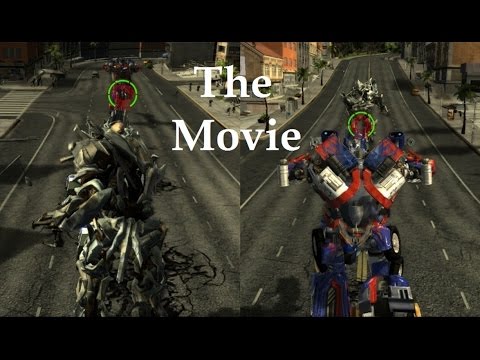 [Epic Modding] Transformers The Game: The Movie (Optimus,Bumblebee,A.I vs Megatron,Starscream,A.I)5

Story plot: Blackout chasing Sam and the first who came to stop him was Bumblebee with Optimus Prime, but the “hound” of Megatron it seems to be really tough guy! It was so tough that Bumblebee injured very badly and he had to leave to heal his wounds! Optimus call immediately Jazz to replace Bumblebee! The destruction was enormous and Optimus forced to drag Blackout away from the area! That moment came Starscream to the fight! Starscream, Blackout, Optimus, Jazz fight each other! Optimus and Jazz managed to injure Starscream really bad and he forced to leave! Same with Blackout!! By the time they went to leave Megatron appeared! He killed Jazz! At the same time in the other side of the city Ironhide fighting with Bonecrusher and Brawl and killed them both! Then together with Bumblebee they went to stop Megatron!

I want to mention that I used 2 special abilities for Megatron and Sonic Boom ability for Bumblebee!

If you want to see the best moments and dialogs see my first comment!